The Family of Man

from The Family of Man by Karl Dallas 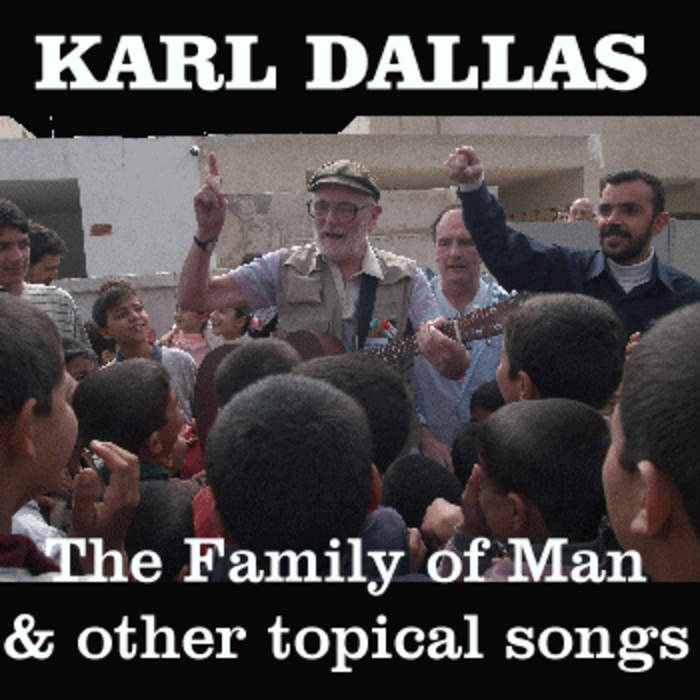 I first composed this song in 1953 and it was recorded by the Liverpool Spinners (also by the London Youth Choir, and the Bitter Withy). It was inspired by the exhibition of that name shown in the Royal Festival Hall in London in 1955. It has been shown in 38 different countries and visited by 9 million people. It's currently on show in Clervaux, Luxembourg.
Back then, "man" was reckoned to include "women", but today we would say "humanity". I tried for many years to make it less gender-specific, but I've failed. I always used to preface it with an apology until a woman shouted out: "Just sing the fucking song, Karl."
The British classical composer, Alan Bush, put together an arrangement for choir, which was published by the Workers' Music Association as a songsheet.
I've changed the words over the years, but the recorded versions (apart from my own) and Alan Bush's arrangement are the originals.
At the last count it had been translated into 13 languages. It is published in many school songbooks and even some hymnbooks.

I belong to a family, it’s the greatest on earth;
A new one every day is coming to birth.
My name isn’t Johnny, or Jimmy, or Joan.
It’s a name everyone can be proud we own.
It’s the family of man, keeps growing,
The family of man – keep sowing
The seeds of a new life every day.

I’ve got a sister in Sydney, a brother in Paree,
The whole wide world is dad and mother to me.
Wherever you go you will find my kin,
Whatever the creed or the colour of the skin,
They’re the family of man . . . (etc)

From Afghanistan to the streets of New York,
Don’t matter how you worship or how you talk.
We’ve all got a life and others to share it:
Let’s bridge the oceans and declare it
The family of man . . . (etc)

From the North Pole ice to the steamy equator
We’ve all got to live together sooner or later,
But I’ve not much time, I’ve had my fill
Of the men of war who want to kill
The family of man . . . (etc)

Now some people say the world is a terrible place,
But it’s just as good or bad as the human race:
War and misery or peace and joy
We can build or can destroy
The family of man . . . (etc)

Featured sounds from Fly Lo and Ahmed Idris, plus Mother Nature hops on to drop off new project